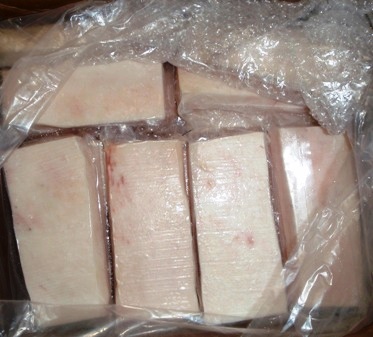 Escolar is an oil-rich and flavor-intensive fish. It is also known as walu and sometimes incorrectly called white tuna.

Tropical and sub-tropical waters around the world.

Escolar is primarily caught as bycatch in warm-water tuna fisheries around the world. In the U.S. it is caught in the Gulf of Mexico and it is also imported from countries such as Indonesia and Ecuador. The stock status of escolar populations is unknown. In U.S. fisheries the longline gear used to catch tuna and escolar is heavily regulated to minimize bycatch but these same conservation regulations are not often implemented by foreign fisheries, which have high levels of bycatch of other fish species and sea turtles.

This frozen at sea product from the South Atlantic is of supreme quality. It is cut into perfect blocks for a thaw and serve sushi product. Blocks weigh 8 to 12 ounces.