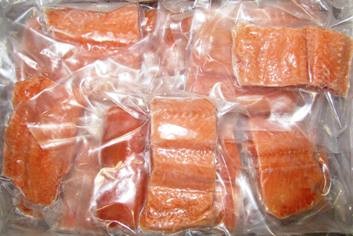 Wild salmon are found throughout the northern Pacific Ocean.

In the U.S. salmon fisheries are well managed. Alaska's fisheries are the healthiest, due to a long history of conservation-based regulations and healthy riverine habitats supporting reproduction. Stock assessments are conducted in season based on individual populations in individual areas. No stocks are known to be depleted and when stocks are found to be below target levels rebuilding plans are quickly implemented. Each population is managed to ensure enough fish have passed through an area on their way upstream to spawn (called escapement) before harvest is allowed. Alaska also has a large hatchery program that raises juveniles in captivity then releases them to support the wild population and wild fisheries. Salmon populations harvested in the contiguous Pacific states (CA, OR, and WA) are very well managed, but some populations are extremely depleted, some to the point where they are in danger of extinction, because of the loss of freshwater spawning habitat and migration routes due to urbanization and damming of rivers. This has made management of salmon for sustainability extremely difficult because populations cannot be protected or rebuilt by only limiting fishing pressure. Instead, management for such threatened or endangered species is designed to stabilize the populations until habitats can be restored. Stocks of salmon that are still healthy are fished in a sustainable manner. Gear types vary by area, but none of the gear-types have much impact on the surrounding ecosystem and bycatch is low and well-monitored.