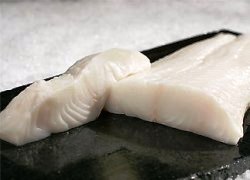 Chilean sea bass is the market name for Patagonian toothfish, and is not actually a bass or always from Chile. It is a large, slow growing, deep water fish with a very high oil content, making it difficult to overcook. This fish cooks up beautifully for large functions. It is white and mildly flavored with large, moist flakes and is favored by many people. Chilean sea bass is frozen at sea, and fresh product has merely been thawed before sale.

Chilean sea bass is found in the southern waters of the Atlantic, Pacific and Indian Oceans, and in the Southern Ocean around Antarctica. Many populations are found in international waters that are not under the jurisdiction of any one country.

There is great variation in the sustainability of Chilean sea bass fisheries, dependent upon the origin. While some small populations of Chilean sea bass are healthy, others are depleted or the status is unknown. Similarly, some regions collect data and perform stock assessments to monitor and manage the populations, while others have not. Overall, management regulations are effective and conservative, but without good data and stock assessments these regulations can become ineffective. One of the biggest threats to Chilean sea bass populations is Illegal, Unreported, and Unregulated (IUU) fishing. The Southern Ocean around Antarctica is huge and inclement weather is common, making it very difficult to patrol and enforce regulations. Regulations such as the Catch Document Scheme (CDS) and Vessel Monitoring System (VMS) have been implemented to combat IUU fishing, but people intent on circumventing regulations have found ways to sabotage or tamper with these electronic safeguards. IUU fishing has decreased a great deal over the last decade, but still remains a problem in some areas, especially in the Indian Ocean Sector. The U.S. has stringent regulations for imported Chilean sea bass, making it less likely that illegally harvested fish are coming to the U.S. but it is still possible. Bycatch of seabirds, once a severe threat to populations, has been reduced substantially with gear modifications and closed seasons. Again, IUU fishing is unlikely to abide by these regulations and continues to threaten seabird populations.