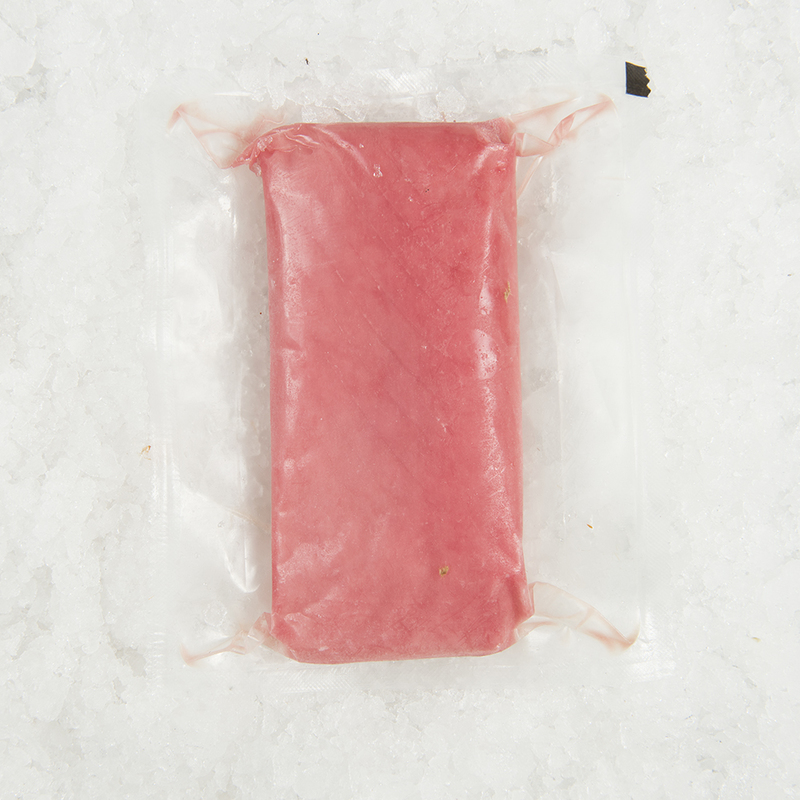 We carry frozen sushi grade yellowfin tuna, known as saku tuna, which is commonly used as maguro in sushi bars. It is boneless, skinless, frozen vacuum packed yellowfin tuna that has been cold smoked (processed with filtered wood smoke) to keep its red color. Yellowfin has a mild flavor and meaty consistency, somewhat similar to swordfish. It is firm and moist, with a bright red color that turns brown, gray or tan when cooked. Yellowfin is best served raw as sashimi or seared and served rare.

Yellowfin tuna are found in tropical sub tropical oceans around the world.

Yellowfin tuna are found all over the world and are highly migratory species, meaning their populations are spread over a large geographic area and many countries fish on one population. As such, they are managed by international agencies. Distinct populations of yellowfin tuna are found in the Atlantic Ocean, Western Pacific Ocean, Eastern Pacific Ocean, and Indian Ocean. Tuna have a high reproductive capacity and fast growth rate, making them very resilient to fishing pressure. The population of yellowfin tuna in the Atlantic is smaller than the target size (but close) and fishing pressure is at an appropriate level to rebuild the stock to the target. In the Pacific, yellowfin are either at or above the target population sizes, with fishing pressure less than desired, meaning more yellowfin can be harvested sustainably. In the Indian Ocean yellowfin is very close to the target size and current fishing pressure is appropriate to sustain the population. One of the major sustainability concerns in tuna fisheries is bycatch. The primary gear used to harvest fresh and frozen tuna is the longline, a method by which multiple hooks are hung from a horizontal line stretching along many miles and left to fish over a period of hours. The United States has implemented many regulations to minimize the impact of longline gear on bycatch of other finfish (billfish, sharks, etc.) and protected resources (sea turtles, marine mammals, sea birds, etc.) U.S. longline fishermen are required to use circle hooks and specific types of bait to reduce the incidental catch of sea turtles. They must also participate in workshops to learn techniques for safe handling of turtles. In the Pacific there are limits set on the number of sea turtle interactions that may occur, after which the fishery is closed for the remainder of the year. There are also large areas completely closed to longline fishing to reduce interactions with protected species and juvenile swordfish, and all longline vessels must carry a Vessel Monitoring System (satellite tracking system) and often must move gear after any interaction with a protected species. Longline vessels are often required to carry fishery observers to collect data on harvest, bycatch and protected species interactions. Most foreign countries have not implemented these types of regulations to reduce longline bycatch, leading those fisheries to have serious negative effects on the ocean ecosystem. The most sustainable choice in tuna are yellowfin from the U.S. Atlantic, Gulf of Mexico and Hawaii.