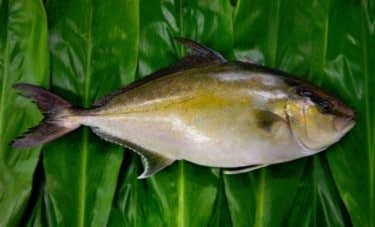 Hamachi, also known as yellowtail, is a highly prized, expensive fish in the amberjack family. It is rich, flavorful, and high in fat. When cooked the meat is white and firm, but it is also a high quality sashimi fish.

This species of yellowtail is found in the northwest Pacific from Japan and the eastern Korean peninsula to the Hawaiian Islands.

Though some yellowtail are wild harvested, a substantial amount is farmed. Most farmed yellowtail is from Japan. A cousin species, also called yellowtail, is harvested and farmed in the eastern Pacific and in Australia. Yellowtail are raised in floating net cages in coastal and open ocean areas. If stocking and pen densities are too high, there can be substantial water quality issues caused by the waste flowing out of the pens. Yellowtail are carnivorous, thus large amounts of wild fish are harvested to make feed for farmed yellowtail. Sometimes raw fish are fed directly to large farmed yellowtail. One of the biggest environmental issues in yellowtail farming is the use of wild caught juveniles to stock the farms. This removes fish from the wild population before they have had a chance to reproduce, which could compromise the sustainability of the wild population. The aquaculture industry is developing methods of raising yellowtail in hatcheries.

Kanpachi, Seriola rivoliana (commonly known as Almaco Jack) is a tropical pelagic whitefish found throughout the South Pacific. The flesh is firm, rich, and buttery with a flavor that some describe as a cross between Sablefish and Yellowfin.