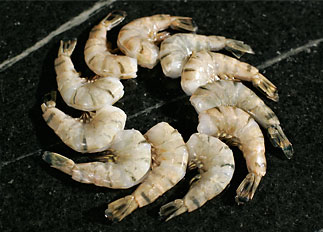 Tiger is a farm raised shrimp, often thought of as less sweet and flavorful than other wild caught species, though these shrimp have excellent consistency. The meat is also softer than that of many other shrimp species. They are also the largest of commercially raised shrimp species.

Black tiger shrimp are found, both wild and farmed, throughout the western Pacific and Indian Oceans.

Shrimp farming historically has not been very sustainable, but also varies greatly between farms and between countries. The rapid expansion of aquaculture has been difficult to regulate, leading to lack of environmental protection. Thailand and Indonesia are farther along the path to sustainability while China and Vietnam are lagging behind. Most shrimp are farmed in coastal areas where mangrove forests have been removed to make way for a shrimp pond. These mangroves are very important to ecosystem function and should be protected and replanted. Shrimp are omnivorous thus do not require substantial amounts of fishmeal in their diet, unfortunately farmers often feed shrimp a commercial diet including fishmeal and oil to increase growth. Disease is prevalent and use of chemicals and antibiotics is common in many countries, though is becoming more highly regulated in some. Unfortunately, black tiger shrimp are more susceptible to disease than many other species of shrimp, and antibiotic use is often higher in operations raising black tiger shrimp. Pollution (waste and chemicals) from less sustainable farms is released into the surrounding environment with no treatment or containment periods, while some farms are beginning to treat their wastewater or limit releases to a few times a year. Even better, some farms in Thailand are moving towards closed containment, where water recirculation and recycling techniques allow use of the same water for multiple growing cycles.