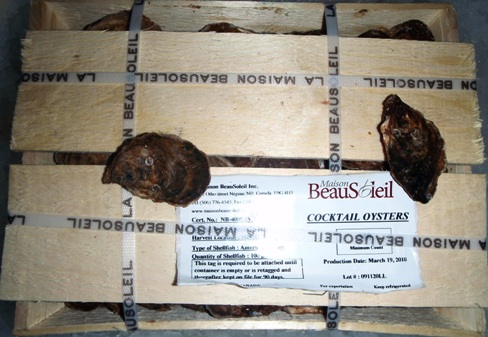 Beausoleils are farmed in floating trays in Miramichi Bay, New Brunswick, which is about as far north as you can push a Virginica oyster (only Caraquet is farther). Suspended just below the surface, gently jostled by the waves, they never touch the sea floor. Half the year they grow in floating bags near the surface, enjoying as much warmth and food as the Canadian coast has to offer. When Canadaâ€™s dark winter sets in, they are suspended in deeper waters to ride out the ice. Because of their carefully controlled, rocking, uncrowded environment, Beausoleil shells are always perfect. Not bigâ€”it still takes them four years to reach a 2.5-inch cocktail sizeâ€”but well groomed, and so uniform they almost look stamped out by machine. The white shells have a classy black crescent. The flavor is refined and light, like a Caraquet, but with a bit more brine, and something of the yeasty warm-bread aroma you get with good Champagne.