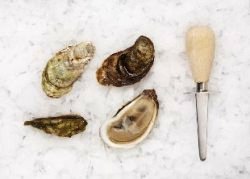 Island fisherman harvest these oysters with long handled tongs from the sides of small dories in Salutation Cove, Bedeque Bay. A farmed, small, choice oyster from one of only three farms in the Bay.