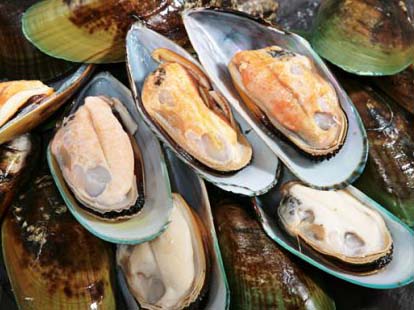 Farmed mussels are higher quality than wild mussels because they are kept below the water even at low tide, allowing them to feed continuously so their meat content is higher. Another benefit is that they are also are kept above the bottom, reducing ingestion of the grit that often accompanies a wild mussel. The beard, the threads that attach the mussel to the rock or rope, should be removed before preparation. Mussels should be alive and tightly closed before being cooked. Open mussels should be discarded, as should any that do not open after they are cooked.

The green shell, or green lipped, mussel is native to New Zealand but has been introduced to Australia, where it is considered a pest.

Aquaculture of green mussels in New Zealand is very sustainable. The species is native to the area but is grown on ropes suspended from platforms on the surface of the ocean. The ocean is continuously monitored to ensure that the growing environment is free from pollution and other contaminants. The seed for aquaculture operations is collected from the wild stock, primarily by collecting seed (young juveniles) that wash up on the beach, but also by providing settling habitat for the free swimming larval stage. Mussels are filter feeders and do not require any supplemental feed though there is some concern that densely stocked mussel farms could alter food web dynamics. Pollution is minimal and chemicals are not used in mussel culture.

Shell should have a greenish appearance and should appear elongated.