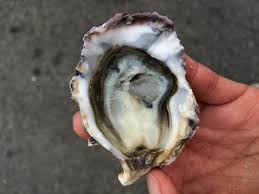 These New Zealand oysters were different. Shells were beautifully ridged like Gigas oysters, and the meats were super firm and plump (makes sense since it’s winter in New Zealand this time of year). What I didn’t expect, though, was their texture: they were… chewy, almost crunchy. Flavor-wise, they were nice for the sweet oyster lover -- strong melon finish with a mild brine. My favorite thing about the oyster was how easy and clean it was to shuck them.