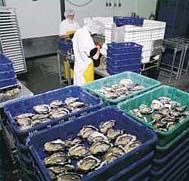 Fanny Bay oysters were one of the first British Columbia oysters ever harvested. The farm has excellent quality control so the oyster shell is always complete and the oyster inside is fresh and juicy. Flavor is smooth and slightly sweet.