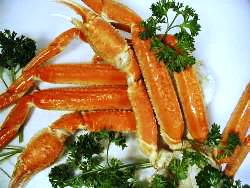 This product is cluster, meaning the legs attached to a part of the body. Legs are 5-8 inches in length.