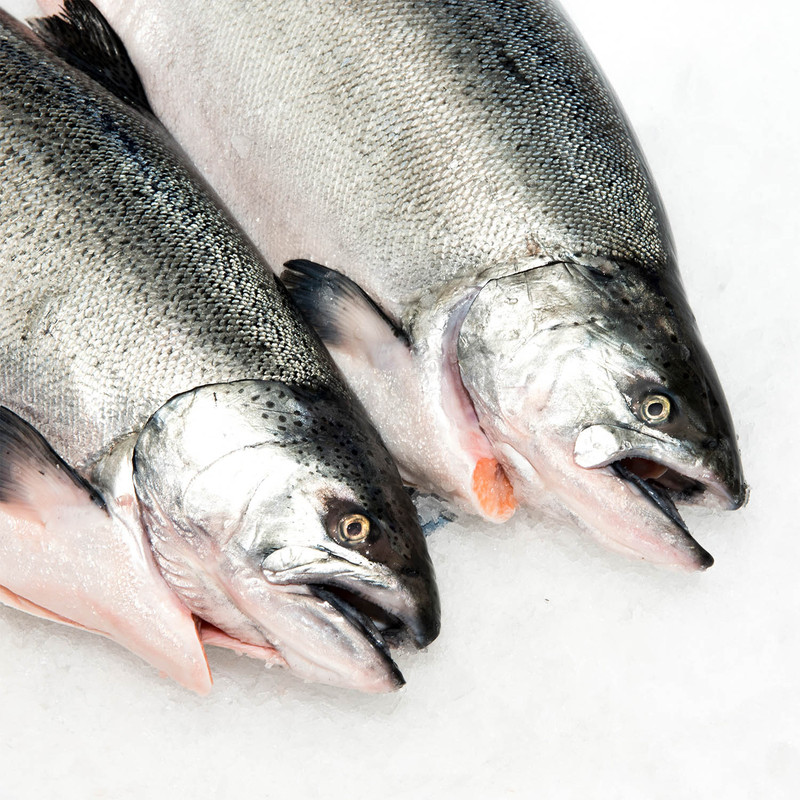 Chinook, or king, salmon have a reputation as the highest quality of salmon. It is the largest species of salmon and in the wild it undertakes some of the longest migrations upstream, making it necessary for them to build the highest content of oils and omega 3 fatty acids to fuel that journey. King salmon have a deep and rich flavor, with a soft, dark colored meat. With the high oil content, king salmon takes well to broiling and grilling.

In the wild, king salmon are found in the northern Pacific Ocean from Japan, through the Bering Sea, and down the west coast of the U.S. to southern California. King salmon are farmed in New Zealand, Canada (British Columbia), Chile, and Washington State.

Salmon farming in New Zealand is well monitored and regulated by the government. Though king salmon are not native to New Zealand, they were intentionally introduced in the late 19th century as gamefish and eventually established naturally reproducing populations in a few rivers. The first salmon farms were established in the 1980s and king salmon is the primary salmon species farmed in New Zealand. They are typically raised in coastal sea cages, though some culture does occur in freshwater. Regional councils oversee the permitting and monitoring processes. Salmon farm applicants must provide a comprehensive and independent scientific investigation of the potential ecological effects of the proposed farm. If the regional council concludes that there is a low and acceptable risk of environmental effects, a permit is issued along with conditions for farm operation. The councils then monitor farms for compliance. In addition, the aquaculture industry has developed an Environmental Code of Practices to minimize impacts on the environment. There are no native species of salmon or trout, thus few natural diseases that can be passed to the fish in the farms. This low risk of disease, in combination with low stocking densities, prevents the need for antibiotics, pesticides and other chemicals. King salmon do require a diet high in protein and oil, but the industry is experimenting with agricultural protein and oil substitutes. Overall, the current state of king salmon aquaculture in New Zealand appears to be sustainable.

Sustainably raised with selective grading and careful handling, the New Zealand King Salmon Company allows only its finest quality King salmon to be labelled Ōra King – those that best represent the superior culinary attributes of this unique breed. Ora King salmon are farmed in marine net pens in the pure and isolated waters of the Marlborough Sounds, at the top of the South Island of New Zealand. With a farm footprint is less than 0.01% of the Marlborough Sounds, all the salmon farms are swimmable - 98% of the space is water, with salmon occupying only 2%. The salmon are fed a nutritionally balanced diet, certified non-GMO and from certified sustainable sources. It contains everything the salmon need to thrive and grow, and nothing else. Highly respected Monterey Bay Aquarium’s consumer guide, Seafood Watch has given New Zealand King Salmon a ‘Best Choice’ buy rating for consumers. Vancouver Aquarium’s Ocean Wise conservation programme also recommends Ora King as a sustainable seafood option.