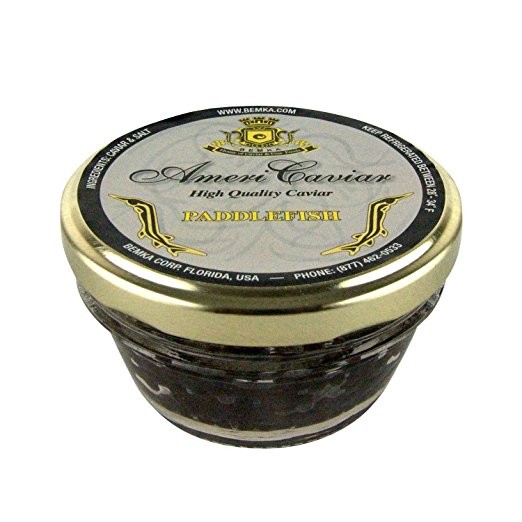 Often thought of as just the eggs of sturgeon, caviar can come from a wide variety of species. All have a different flavor profile and some are more sought after than others.

Traditionally caviar was sourced from sturgeon the Black and Caspian Seas, then from rivers in North America. Now other varieties of caviar can be sourced from all over the world.

In general, wild caviar is not sustainable. Many of the favored species of sturgeon and paddlefish are highly depleted. These species have long lives, making them less resilient to fishing pressure, and they often inhabit river habitats that are severely degraded. Caviar from farmed sturgeon and paddlefish is a more sustainable option, as is caviar from other species such as salmon, trout, whitefish and lumpfish. In farming operations, the females are not killed to harvest the caviar (it can be surgically removed or forced out via stripping) and can produce multiple batches of caviar.

Paddlefish caviar has medium-sized grains with dark to light gray colored eggs, and is derived from the Polyodon Spathula fish, which is not a sturgeon species. Paddlefish is considered a cousin to the Caspian Sevruga, since it is comparable in taste, color and size to that of Caspian Sevruga caviar. Paddlefish is wildly popular among chefs and epicureans, and is typically served on canapes or blinis with creme fraiche, or even as a garnish. Fun Fact: Fossil records of Paddlefish date back over 300 million years – nearly 50 million years before dinosaurs first appeared.